Over 430 Fun Palaces took place around the world as local communities organised events that bring arts, science and culture to the heart of the community. Last Saturday the rain didn’t stop over 600 people visiting Stirchley Baths Community Hub  and Stirchley Library for the annual Stirchley Baths Fun Palace event. A fantastic team of community volunteers all rallied round in preparation (including putting over 50 chairs in the cinema room!) and on the day. Having previously sent the community to outer space and back again last year, this time it had been decided very enthusiastically that this year we would be exploring the history of the Vikings. 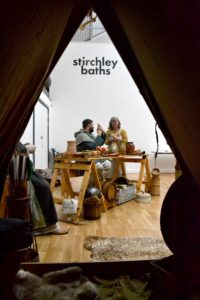 We had a real treat in store for visitors – we were joined by Viking re-enactment group Ardenweard, who set up a living history museum in our Main Hall, featuring a big tent lined with reindeer skins to sleep on, a dining table and authentic vessels and weaponry. Children and adults alike were invited to try on mail and authentic helmets (no horns please!) – and there was also a science display presented by Phil Banting of the Stirchley History Group. and there was also lots of factual information on display. We had the chance to write our names in runes and to learn about the amazing voyages of discovery the Vikings made, including a demonstration of the power of magnetism. 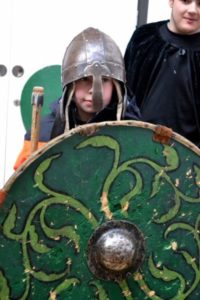 The Friends of Stirchley Library also had an excellent craft, storytelling and making day, and we are very much looking forward to our next event together. It was great to see those who had attended those sessions coming into the Baths, talking proudly about what they had done. The standard of Viking jewellery they had made was particularly impressive!

An impressive Viking longship was placed in the centre of the Main Hall, surrounded by tables where hundreds of children and adults were  taking part in a mammoth craft session making shields to decorate the boat – and the day finished with a big community row led by Ardenweard. And the action wasn’t just confined to the Main Hall. At 12pm and 2pm we were summoned outside, where the Vikings would take part in battle. Making excellent use of the access ramp leading outside, we could see the warriors clash below us. After losers were vanquished and winners were celebrated, those lucky enough to be under 10 years old could get into the spirit of things with Kiddy Vike, a chance to fight the Vikings for themselves! There were also talks and stories in the Cinema Room, and all this gave the craft-makers in the Main Hall some much needed rest! 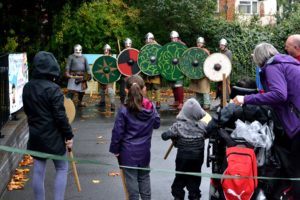 The event was undoubtably a success, and Arts Forum Selly Oak and Stirchley Baths would also like to thank Stirchley The Way Forward for their support and Change Kitchen for feeding our many visitors. We are also happy to report that Friends of Stirchley Library also had an excellent craft, storytelling and making day, and we are very much looking forward to our next event. A big thanks to Alex, Emma, Karen, Stu, Charis, Theresa, Jessie, Phil, Andy, Suzanne, Mark, Susan and Danni who supported the event on the day or behind the scenes in its preparation and promotion.

If you would like to get involved in planning next year’s Fun Palace or want to suggest a theme for the event, then please get in touch! 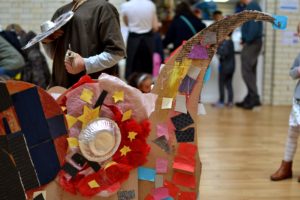