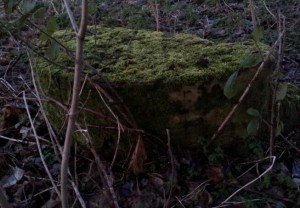 Along the River Rea at the end of Hazelwell Road there lies a boulder-shaped item rumoured to be a long-forgotten piece of Stirchley history. It is believed to be a mill stone from Hazelwell Mill.

The River Rea in Stirchley had three major watermills: Hazelwell Mill, Lifford Mill and Dogpool Mill. Hazelwell and Lifford grew from the corn industry, Dogpool’s original purpose is not so clear. Lifford is the earliest recorded and belonged to Lifford Hall dating from 1340.

Hazelwell Mill, first recorded in 1704, would have inherited it’s name from the Hazelwell family, who resided in a timber-framed manor house known as Hazelwell Hall. This belonged to William de Hazelwell from 1325. This is now the site occupied by the Hazelwell public house, which was built in the 1930s.

Between 1843 and 1863 the mill was occupied by William Deakin and Sons (presumably no relation to me!). The Deakins were sword cutters and gun makers and the site was later a gun barrel works. By 1895 however it had been converted into a rubber factory. In a previous blog I mentioned the residents of Bond Street from the 1911 census. Many of these people listed their occupation as ‘rubber worker’, which would indicate an association with the Mill. To look at the area as it would have been you can access historical maps online. There is a great tool for looking at an area and superimposing an old map over it.

During the 19th century the mills on the Rea played an important part in the industrial growth of Birmingham. Metal rolling, gun making and chemical works were all produced by the mills, contributing to Birmingham’s explosive industrial expansion.

The area along the Rea would have also been used recreationally by the families of Stirchley during the mills lifetime, much as it is used today. Next time you’re walking along the Rea or going to Hazelwell Park take a minute or two to look out for the ‘mill stone’. There is a ‘Friends of Hazelwell Park’ group who help with the general maintenance of the area. You might already know them for the infamous Fun Day and Duck Races.