Among the donations are a Stirchley Park t-shirt, school cardigan, Bournville Station train ticket, library card, beer mat, building plans and recipe for the Stirchley loaf! These are some of the people I have met along the way:

During the last five weeks I have been working with members of the community to assemble a Stirchley history group. The creation of the group, which is supported by the Heritage Lottery fund is for the benefit and lasting legacy of the Stirchley Baths project. After a call out on social media and presenting at Stirchley Neighbourhood Forum, a group of us met at P Cafe.

The initial task is for the group to produce an illustrated leaflet about the historic importance of the Baths. The leaflet will include a general introduction to Stirchley history, the history of the Baths, opening times, contact information, facilities and room hire info. This content will also be used on Stirchley Baths website.

During the first meeting the Baths leaflet was explained to the group. Some members were happy to carry out research relating to information for the leaflet, while others simply wanted to talk about Stirchley history. The one thing everybody had in common was a passion for local history, community and telling the story of Stirchley.

Our second meeting took place in Stirchley Library just over a week ago. The library was chosen because it houses the local history section and copies of the original 1910 architect plans for the Baths (it also has two of the friendliest and helpful Librarians around- Denise and David).

During this second meeting members talked about the era they had been researching. Although not all the information will go into the leaflet it was important to lay sturdy foundations. Some members are looking into early Stirchley, including the middle ages; other are investigating a pre-Cadbury Stirchley, which relied upon industry, such as the mills along the Rea. The offering of the land, opening and running of the Baths is another era covered by a member; as is a history of public baths in general. Another member has accrued thousands of old Stirchley photographs which we are going to sort through as possible images for the leaflet. And one member is in the process of writing a brief biography of his father, Den Jones, who played with his orchestra at the Baths in the forties/fifties. As a group we decided to do a call out on social media and at a stall at September’s Late Summer Bash for people who worked or learnt to swim at the Baths. We’re hoping to bring together people who gained their swimming badges.

There were a few surprises during the meeting including Alison’s discovery of a public baths photograph. We’re not sure if it is Stirchley Baths, but we’re hoping somebody will recognise those in the photo.

The other surprise was Nigel’s reveal of the original ceremonial plaque. The plaque had been removed from the exterior of the building some 25 years previously by a concerned resident, when the building was unused and in disrepair. It was handed to Nigel a few years ago when the Baths campaign began. The plaque will return to the Baths once the restoration is complete.

The next meeting of the History Group will take place at Stirchley Library between 5 and 6.45pm on Thursday 6th of August. If you would like to join, please pop by. Not everybody in the group has chosen to carry out research, but everyone is supportive of the Baths project and enthusiastic about Stirchley history.

Future Stirchley History Group projects may include developing history tours of the Baths and a heritage trail of Stirchley.

Methodism has a history of taking action for social justice, advocating on behalf of the most vulnerable in society. The people of St Andrew’s are very actively involved in this, with many working in caring professions – including nursing, teaching, children’s services, environmental and community-focused work.  The church also supports organisations like Citizens UK Birmingham, B30 Foodbank and charities such as Action for Children.

Running for almost twenty years, St Andrew’s Community Project worked with Stirchley residents to set up amongst others: a community newspaper called Snooze, developed Stirchley Carnival, campaigned for the building of the old community centre, ran toddlers group and summer holiday playschemes. In 1989 in recognition of the opening of the Community Centre St Andrews created the Time Capsule! 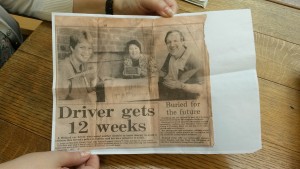 Sue Ford was instrumental in those early years of Stirchley Community Centre. Sue has lived in Stirchley for most of her life. Her parents married during the Second World War and she and her siblings grew up at 1227 Pershore Road; above what was then her uncle’s tailor shop. She remembers the Co-op Christmas grotto as the best in Birmingham. For our meeting Sue brought along the newspaper cutting of when the 1989 time capsule was created.

Sue ran the first play group at what was then the new Community Centre. She also ran Stirchley Opportunity Group, which was made up of at least 50% of children who had a disability- the first of its kind in the city. The Stay and Play toddler group is currently back at St Andrews, awaiting the opening of Stirchley Baths community centre.

Sue was delighted to revisit all the objects St Andrews gathered for the 1989 time capsule, including newspapers commemorating Birmingham’s centenary, a red nose from only the second ever Comic Relief and photos of St Andrews members. One such photograph shows children from St Andrews Playscheme. We would like to recreate this photograph for the new time capsule for Stirchley Baths. If you are in the photo or know those who are please get in touch. 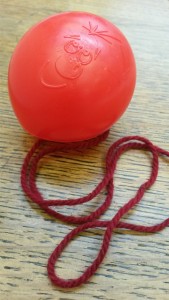 Another Sue who is also a member of St Andrews is Sue Ball. She was the first ever Community Worker and editor of ‘Snooze’. There is a copy of ‘Snooze’ in the 1989 time capsule and you can view the digital archive here.

Both the 1989 and 2015 time capsule will be placed under the pool and will be visible through a Perspex window.

If you would like to suggest an item to go into the new 2015 time capsule pop into Stirchley Library between 10am & 1pm on Saturday 11th July. Alternatively email louisedeakin.communityheritage@gmail.com

I have been volunteering on the Stirchley Baths project for 18 months. My involvement began when I noticed a tweet about a social media surgery happening at Loaf. On a very dark and miserable February evening, Nick from Podnosh tutored myself and Jon from Belfour Beatty in the ways of blogging.

Having not blogged before it took a little bit of time to get to grips with uploading photos and video. And in those early days I would never have guessed by summer 2015 I’d have posted over 20 of the things! I’ve even contributed blogs to Birmingham Conservation Trust and Birmingham Museums Trust, all off the back of that one session!

The subjects of my blogs have felt like a world of discovery. Previous to living in Stirchley I knew very little about the village. I have since discovered the social enterprise that was TASCOS, that there were three mills along the Rea, the original bakery stone from 1891 and ghost signs galore!

Not only that, but I have met some great people. I’ve been fortunate to meet special groups, of which Stirchley is full to bursting! Groups like S.U.R.N, SNF, Stirchley Sessions and Friends of Stirchley Park and their four legged companions. Stirchley is a special place with a strong beating heart. The people who live and work here are always striving to improve its outlook. Where else would you find folk so passionate about planning permission and wheelie bins?

And Stirchley is full of characters! Nobody thought anything of me taking a bear on tour during a Baths site visit. And why would they? This village has a 10 – foot gorilla for goodness sake!

I’ve enjoyed putting my heritage cap on and discovering through the 1911 census who was using the Baths and who was driving the trains and who was making the chocolate and who lived in my street!

And it’s felt special sharing people’s memories, such as a local resident who, apart from serving in the Second World War had spent his whole life here. Growing up surrounded by fields, fondly remembering the milk cart and the tram. He grew up in a time when electricity was only just replacing gas lamps, had his wedding reception at the Three Horse Shoes and raised his two daughters here; until his final farewell earlier this year.

I’ve gained so much from being involved in the project and now we are arriving at the most exciting of times- the community centre is almost finished! There’s never been a better time to get involved!

If you’d like to know more about volunteer roles contact the Baths Heritage Officer, Kate Andrews at kate@kateandrews.me

Created for the benefit and lasting legacy of the Stirchley Baths project, we’re looking for people who are passionate about local history and community and would like to share their knowledge. You don’t need to have previous research experience, just an interest in the project and telling the story of Stirchley.

The initial aim of the group is to produce an illustrated leaflet about the historic importance of the Baths. This content will also be used on Stirchley Baths website.

The leaflet will include a general introduction to Stirchley history; the history of the Baths and its historic significance; opening times, contact information, facilities and room hire info.

The first meeting will take place at:

Hope to see you there!