If you swam at Stirchley Baths in the late 1980s you may well remember there was a tropical mural at the deep end of the pool, painted by the Assistant Manager, Paul Jones, to hide the scaffold which was supporting the eroding balcony. It brought warmth and light to all those who used the public baths.

The design of palm trees, golden beaches and a sail boat reflected in blue waters under a sun-filled sky must have cheered the swimmers no end.

This mural was the last piece of public art in the baths. It is now going to be re-created as a permanent piece of artwork – mounted in the Co-working space next to the public café – and a celebration for the venue’s future. Community is at the heart Stirchley Baths and so it is fitting that the new mural is created by and for those who will continue to use the venue for years to come.

Working with tapestry needle-point artist Tina Francis, during this 8-month project we want to involve as many of our local communities as possible; users of the building, families, schools, young people and visitors to events. We will also set up a monthly stitch group.

Our community stitch project will replicate the design of the tropical mural using stitch/tapestry.

The body of the work will be plastic canvas as it is really easy to stitch into whether you are of pre-school age or a much older person. We want as many age groups and abilities to be involved as possible. Rather than a flat scene we will bring the mural to life with 3D elements which will also be stitched onto the canvas with the addition of knit.

There will be opportunities to get involved until December/January next year. The giant canvas will be cut into smaller areas so that lots of people can contribute; it will then be stitched together at the end. We want to document everyone who has taken part, and if you are willing, a Polaroid snap of you will be added to the wall by the mural as part of this special Stirchley Baths community artwork.

Our initial dates are on the poster below – so pop them in your diary and pop down to the Baths for one or more of Tina’s drop-in stitch sessions. 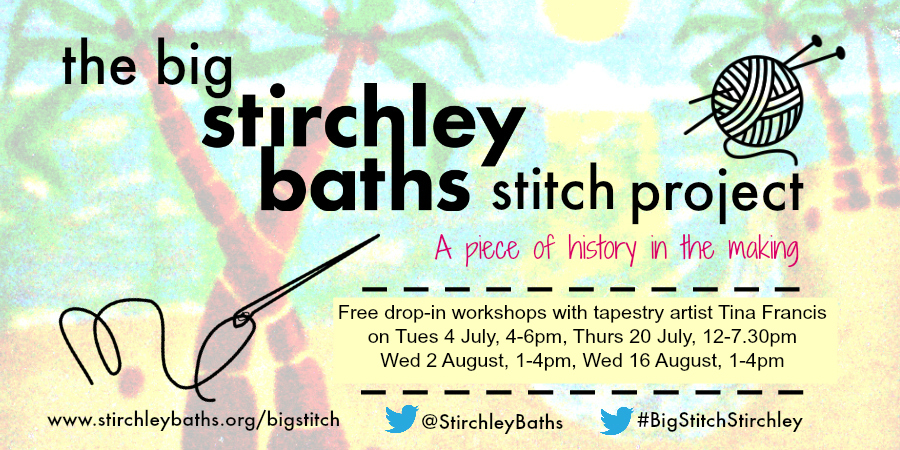