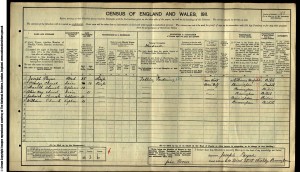 Stirchley is a diverse community filled with professionals, young families, long-term residents and students. Once the Baths opens in 2014 there will be lots of facilities catered towards our needs and wants. These include the main multipurpose Gallery, the Main Hall (which has the facility to screen films – handy for Stirchley Happenings no doubt), an internet cafe and several flexible spaces that can be used for meeting hire, the details of which can be viewed here.

With the Baths having been built for the community that existed in Stirchley in 1911, I started to wonder what those residents were like. A little research of the 1911 census shows an array of different professions. Looking particularly at the residents of Bond Street, which is across Stirchley Park, behind the baths, I discovered lots of people of interest. As expected quite a few worked at the Cadbury factory. Jobs listed included ‘Fitters Labourer’, ‘Moulding chocolate’, ‘Card box maker’s machine attendant’, ‘Overlooker stockroom’ and obviously ‘Confectioner’. Other professions on the street were ‘Postman’ (Edwin Hicken, no. 52), ‘Brewers drayman’ and ‘Boot maker’ (Tandy family, no. 44),‘Bookbinder’ (Lily Mary Elizabeth Law, no. 57), ‘Locomotive Engineer Driver’ (Frederick Lewis Hill, no. 55) as well as ‘Motor mechanic’, ‘Bricklayer’, ‘Blacksmith’ and ‘Electrician’. Doris and Nellie Luckman aged 13 and 10, who lived at no. 19 were even described as ‘scholars’. Obviously their parents had high hopes for them. And Alfred Howell who boarded at no. 39 was described as ‘Hamsters assistant’!

Along with a multitude of Williams, Johns, Alices and Georges there was also a Thirza, who’s name is of Jewish origin. She lived at no. 56 with her parents, Thomas and Beatrice and younger sister Braithet Smitter.

At no. 62 lived the Harris family. Similar in size with the family of three that live in their house in 2014, they were made up of William (father, 49), Mary (mother, 43), Arthur (aged 10) and Gladys (5), both of which were born in the parish of Kings Norton as it was then known. Next door to them, at no. 64 were plenty of children to play with. Joseph Payne is listed as head of that household and living with him are his five nieces and nephews, ages ranging from 16 to 4. There’s no immediate indication of where their parents were, but it’s hard not to wonder if they were orphaned.

The most interesting family I found lived at no. 1 Bond Street. David James owned his own greengrocers, his wife Betsey and two teenage children, Minnie and William assisted him. The James family was made up of 13 children! Can you imagine that many family members in a house that size? The census form only allowed for 15 names, so Albert Edward (8 months) only just made it onto the form!

Having investigated the people of this street, it’s hard not to look out the window and imagine them dressed in the Edwardian clothes of the era. I can see them now, on their way to the factory, sending their children off to school, going to drive a train through Bournville station and maybe even delivering beer to The Three Horse Shoes or British Oak. For all their different professions and individualism, the one thing they all had in common, was the use of the Baths after a long hard day.