The battle on land was played out in trench warfare and poison gas became one of the most-feared and best-remembered horrors of the war. Tanks were first used in combat by the British in 1916, with only partial success. However, their effectiveness would grow as the war progressed.

At sea Britain began a naval blockade of Germany. The strategy proved effective, cutting off vital military and civilian supplies. German U-boats attempted to cut the supply lines between North America and Britain.The nature of submarine warfare meant that attacks often came without warning, giving the crews of the merchant ships little hope of survival.

In the skies Germany employed zeppelins for reconnaissance over the North Sea and Baltic and also for bombing raids over England and the Eastern Front.

In 1909 it was decided buildings at the University of Birmingham were to be used as a 520- bed hospital, should war mobilisation ever be needed. The first convoy of 120 casualties arrived on September 1st 1914. In October 1915 annexes were created in nearby schools. To avoid confusion with the area of Selly Oak, Selly Park annex was renamed as the Stirchley annexe. It had 225 beds, with tented accommodation in the gardens for a further 320 each. 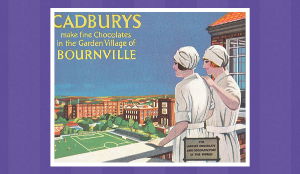 As soon as troops were deployed overseas, Cadbury began producing ‘chocolate for the troops’. These gifts were distributed throughout the the war and in total 20,000 parcels were sent to the front, and to those who were wounded and recovering at home or in  hospital. Each box was packaged up with the message, ‘a present to our friends at the front, from the workpeople at Cadbury’s Bournville’. Many of these workers would have been local women, required to join the work force as men were conscripted. During this time, Cadbury had disbanded their bar on the employment of married women, meaning wives, daughters and mothers of Stirchley fighting men may have played a part. 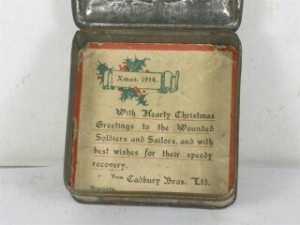 Conscription resulted in the calling up of nearly every physically fit man in Britain – six of ten million eligible. Of these, about 750,000 lost their lives and 1,700,000 were wounded. Of those soldiers that did return many suffered shell shock and even more kept silent about their experiences. Most deaths were to young unmarried men; however, 160,000  wives lost husbands and 300,000 children lost fathers.

Below are the names and addresses of Stirchley men who fell in the Great War:

FREDRICK A. BOX  Son of Jesse and Rosina A. Box, of 59, Dogpool Lane, Stirchley, Birmingham. Native of Ladywood, Birmingham.