On Tuesday 19th February I was invited to visit the Memory Café, a monthly event, initially set up as part of Stirchley Baths’ heritage programme in collaboration with Rachel Duggan and Carla Smith from Leaf Creative Arts. The event is held in the Cinema Room at Stirchley Baths. The Café provides a space for people with dementia, Alzheimer’s and other memory problems to engage with multi-sensory arts activities, to create and reminisce, with a steady supply of hot drinks and cakes.

The community heritage aspect of Stirchley Baths  Community Hub is written through the Memory Café like a stick of rock. Past sessions have included using the building and the themes associated with it as conversation starters; such as swimming, dancing, work and industry. This particular session was about memories of the seaside and holidays. A large table was set up in the centre of the room, with artefacts from the seaside bought in by visitors and carers alike, trays full of seashells, picture postcards, and more memories besides. The music of Reginald Dixon, the organist at the Blackpool Tower Ballroom from 1930-1970, played over the speakers in the room, interspersed with sea shanties such as “Sounds of the Sea (Bobbing Up And Down Like This), music hall favourites and 50s and 60s rock and roll numbers putting memories back to dance events on the pier.

Users and staff from both the Andrew Cohen House in Stirchley and the Juniper Centre at Moseley Hall Hospital joined regular families sitting round the table, along with a number of Stirchley Baths volunteers. The organisers of the event, Rachel and Carla, were particularly pleased that it was a very busy morning at the Café, all in all there were approximately 20 people in the Cinema Room. 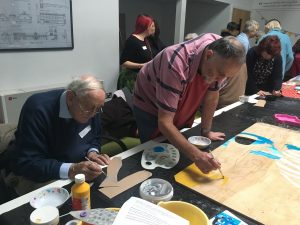 I got speaking to a gentleman called Martin, who was there with his father Brian. Martin had made excellent use of the Cinema Room’s resources and had made a slideshow consisting of old holiday snaps that his father had taken of them on holiday in Saundersfoot, North Wales in the 50s, and in turn as a grandfather with Martin and his family.

Martin had heard of the Memory Café from an occupational therapist in Moseley, and had accompanied his father to every single session since the Café started. What he particularly liked about the space was that it was more than suitable for both carer and parent, with lots of activities for them both to get stuck into, or just a pleasant place to sit and have a chat.

He explained to me that whilst people with Alzheimer’s have weak new memories, the old memories are stronger, and sessions at the Café strengthen the old memories whilst using art and creativity as therapy.

Whilst speaking to Martin I noticed that the users were getting ready to take part in an activity, where they would mimic the waves of the sea by joining together in a circle and billowing a large blue sheet in the air. There was a lot of laughter and happiness between these friends old and new, and soon after that they were all sitting down again, enjoying a nice cup of tea and a biscuit. 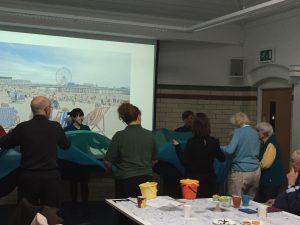 I got speaking to Aileen, one of the NHS staff from the Juniper Centre, who had attended with one of her clients, Margaret. Margaret told me about her memories of camping at Saundersfoot, which had been triggered by the slideshow that Martin had presented earlier. Aileen told me how much Margaret was enjoying the session at the Café, as at the Juniper Centre they also engage the residents with a range of arts including creative writing, pottery, cooking and other activities designed to evoke memories.

Also present were some of the ladies from Creative Reminiscence group, which also meets at Stirchley Baths. Creative Reminiscence is a National Lottery Award For All project that promotes arts for wellbeing and socialisation within the community. I sat with Pat, one of the lead volunteers from the group, who had come in extra early on that day to help set up the wealth of activities.

The visitors had started painting a ‘face-in-hole’ seaside board, taking turns to fill in the polka-dot bathing costumes, the yellow sands and the perfect blue skies. I left the Café that morning mindful of the fact that I hadn’t spoken to everybody that I had wanted to, but there had been so much to do and see, for everyone there, that it didn’t matter. 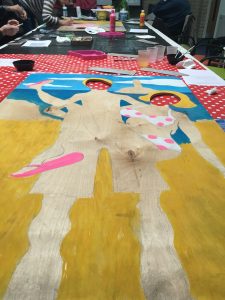 More news to be announced  soon on when the next Memory Café session is taking place.