Stirchley Baths has a great space, the “ Cinema Room” which has played host to a number of film screenings  since opening in 2016 and will be hosting more and more film events thanks to a new community led  Stirchley Community Cinema Project , seed funded by the city’s Local Innovation Fund – this will be starting in the next couple of months so watch this space!

In the meantime we have caught up with our good friends Kopfkino who are returning to Stirchley Baths this Friday 16 March with a new screening of Afshar Films’ ‘The Case Against Assad: Syria’s Disappeared’. The event will be in support of King’s Heath Action for Refugees, and please see below about other ways in which you can help those affected by the Syrian conflict….

Kopfkino is roughly translated as “Head cinema.” What an excellent name for a night dedicated to film. Could you tell us how this event will live up to its name?

Thank you! As well as a literal translation from German, kopf = head, kino = cinema, Kopfkino is also what happens when you use your imagination – resulting in dreams, day-dreaming or even bad dreams / nightmares.

The main feature is a screening of Afshar Films’ Syria’s Disappeared: The Case Against Assad. This particular event by Kopfkino is focusing on the individuals at the centre of the Syrian humanitarian crisis. Over six million Syrians have been displaced because of the conflict. Through this event, we explore how this affects individuals – both in Syria, those who have fled, those who are currently in transit, and also, those who are settling in South Birmingham.

Prior to the film there will be a talk by local group Kings Heath Action for Refugees and refreshments by Loaf Community Bakery.

Tell us about the film you’ve got lined up for us on Friday.

This documentary tells the hidden story of tens of thousands of men, women and children disappeared by the regime of President Bashar al Assad into a network of clandestine detention centres. The film weaves together the powerful personal stories of three Syrians with evidence gathered from regime documentation smuggled out of Syria. With unprecedented access, we follow survivors of detention, families of detainees, regime defectors and international war crimes investigators as they fight to bring the perpetrators to justice and desperately campaign for the release of the disappeared.

Who are Kings Heath Action For Refugees?

King Heath Action For Refugees (KHAR) is a local volunteer group who fundraise, raise awareness and lead donation collections for refugees both settling locally in Birmingham, and in transit across Europe. KHAR was set up in 2015.

KHAR has already raised funds for various charities in Europe including Leros Solidarity Network, to enable the group to send two pallets of handmade toiletries bags to Kos Kindness in Greece. The group has also collected donations from the local community which has been donated to containers going to Calais and Syria, as well as donations to local support organisations St Chad’s Sanctuary and Brushstrokes. Many of the group have also taken trips to Calais to volunteer.

Last year Kings Heath Action & their partner group, http://actionforrefugees.bigcartel.com/product/this-cookbook-belongs-to-usBearwood Action for Refugees created a cookbook as a fundraiser, Loaf contributed two recipes to the book. There will be copies for sale on the night (priced £12.50) so remember your cash if you’d like to buy a copy.

Disclaimer, I work at Loaf. I wanted to get Loaf involved in this event not only because of the cookbook connection, but as part of our ongoing fundraising efforts for the Syrian humanitarian crisis. Loaf is a worker co-operative, meaning we are part of a long-standing and international movement committed to the seven co-operative principles. All of them are important but the seventh, concern for the community, is especially pertinent.

Your previous film screening of ‘I, Daniel Blake’ raised proceeds for SIFA Fireside, a Digbeth based charity improving health and inclusion for homeless people. How well was it attended, and how much did you raise?

Our I, Daniel Blake screening in 2017 raised £135 in cash on the night & food donations for the B30 Foodbank and ticket sales raised £257 for SIFA Fireside. Nicola Human, volunteer coordinator at the B30 Foodbank came to speak for 5-10 minutes about the work of the Foodbank and why many locals people are in need of their vital support. Without spoiling the film, Nicola also pointed out just how relevant the story of Daniel Blake is. It was a very popular film at the time, so we did think that it would be a popular event but we were blown away by the generosity of Stirchley cinema-goers and the atmosphere after the film. It was very emotional.

Are there any plans to make this a regular event?

We hope to do an event every 2-4 months. We have a date pencilled in for our next film on Friday 11th May – we’re just waiting on permission from the Director!

We’re hoping to continue to have the event ticketed through eventbrite so that we can gauge numbers. We want our events to be accessible for all who would like to attend, so it’s always going to be a suggested donation for those who can afford to do so.

If people want to help those affected by the Syrian conflict, what should they do?

There are really good resources out there which detail ways in which you can help. You could start by looking at Refugee Action’s website: https://www.refugee-action.org.uk/heres-can-help-refugees/ I’ve listed their 10 bullet points here. But do click on the link to find out more.

Yes! Whilst I’m here I’d like to raise awareness for the Meena Centre. Meena is a new community interest company based in Birmingham, set up to continue their work which started in Calais with women and children asylum seekers and refugees. They are opening a new centre supporting women and children (and single male carers), offering a safe space and facilitating access to support and information. They’re fundraising for a mini bus in order to help people access their services:

There are a lot of resources and local events listed on the Birmingham City of Sanctuary website, which I’d highly recommend looking at if you’re interested in helping refugees both locally and internationally:

Kopfkino’s showing of “Syria’s Disappeared: The Case Against Assad” will be showing at the Stirchley Baths Cinema Room on Friday 16th March.

For tickets please go to the Eventbrite page:

Pay what you can (suggested £3pp) all profits will go directly to Kings Heath Action for Refugees to support their work with refugees settling locally. 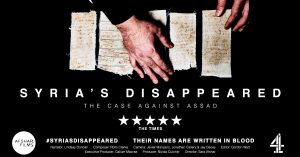