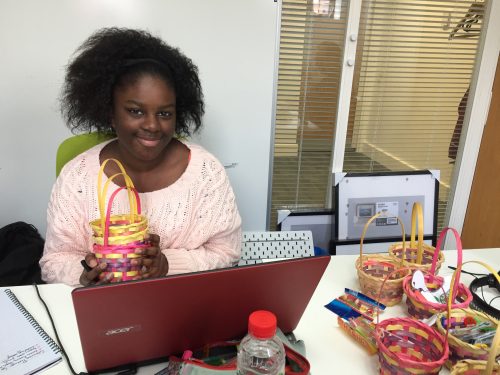 Hi, my name is Ayana. I am 15 years old and in year 10. I go to Jewellery Quarter Academy in Birmingham. My school is fairly new; my year was the first-year group so we are the oldest and the first to do most things, one of them being work experience. My school had originally placed me somewhere else. However last-minute occurrences meant that I could no longer go and had no work experience one day before the end on the week, but later that day, school called my parents and told them about the opportunity to go to Stirchley Baths for work experience. I was quite intrigued.

On the Sunday night, before work experience I was so excited… at first. Then the nerves kicked in. So many questions ran through my head; ‘Are the people going to be nice to me?’, ‘What would I be doing?’, ‘What time do I have to leave in the morning?’, ‘Is my outfit alright?’, ‘What if I get there late?’ and they went on and on for the rest of the night. My fears were also intensified by the fact that it had snowed on Saturday and it was still there on Sunday night! The pavements were full of ice, what if the buses get cancelled? Despite my fear I headed out on the cold, icy, March Monday morning, anxious of what was to come. I barely made it out of my front door before slipping and almost dropping on the ice! Yet still I continued my voyage into Birmingham town and onto the number 45 bus. Before I continue, one thing I realised very early on in the week is that I am convinced that some number 45 and 47 bus drivers don’t want their passengers to make it to their destination alive!

Anyway, I made it to the reception area (barely) and met Lana who introduced me to Suzanne. I thought that they were going to dump me in an office and drop a pile of folders on the desk and tell me to do something with them, so I was pleasantly surprised when I was told that I would be pretending to be a trainee primary school teacher for the day. Was I at the right place? This did not seem like what I had dreamt about the night before. Although it partly made sense. When I had spoken to Karen on the phone on Friday; she sounded really nice.

As the day went on, I was starting to like the place and the people more and more; everyone seemed very friendly. Then I wondered, what will I be doing tomorrow? Yet this time the fear was no longer there, it was more curiosity.

For the next four days, I created the Easter trail that they will be using on the 5th, 6th, 10th, and 11th of April. I don’t consider myself to be one of the most creative people on the planet but somehow, I had all these ideas. I didn’t know what it was? The place, or the people? All I knew was that it definitely wasn’t all me!

Designing the Easter trail consisted of many tasks. This included creating the poster for the event, creating the trails and everything needed for them, creating the list of supplies to buy and so on. At first, I looked at the list and my initial thought was, how am I going to finish this all? It looked like a lot but really it was easily doable, and I was determined to finish it; I had no choice really. 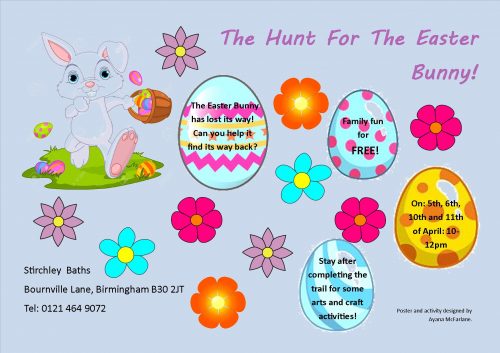 Throughout the week I learnt many key tings that will definitely benefit me when I do enter working life (hopefully not anytime soon). One of them being that communication is key in a job. You don’t always know everything, and you can’t always do everything yourself; team work is key. This is especially true when it comes to being somewhere new; even if it’s just for a week! Another thing I learnt was that in a work environment, there’s a time for work and a time to relax and have general conversations with people, not everything has to be about work, work, work.

One thing that being at Stirchley Baths has helped me improve on is my confidence when meeting and being around new people. If you know me, you would know that I am rather shy when it comes to meeting new people. Being at Stirchley Baths and meeting new people almost everyday as encouraged me to come out of my personal bubble and interact with people. It has also helped solidify my independence when it comes to travel etc. Being on the bus, for almost an hour and a half, by yourself, going somewhere you have never been to before, in an area that you don’t know is nerve-racking. Coming here everyday and getting to know Stirchley has been a real eye-opener to the real world.

One last thing that I would like to say is thank you to Stirchley Baths. You have really helped me to understand what working life is like and debunk some of the ideas that I had about working life. Thank you to al the people that looked after me here and everyone who even just said hello!

Thank you again for this opportunity!

YOU ARE MORE THAN WELCOME AYANA! –  IT HAS BEEN A PLEASURE WORKING WITH YOU – KEEP IN TOUCH!