Once again this April 14, Stirchley Baths is going to host the Stirchley Big Bake, a large event conceived by one of our volunteers Danni Bee, which helps raise funds for Christmas Shelter and other charities. Last year was a real success, and I got to speak to Danni regarding the plans for this year’s Bake… 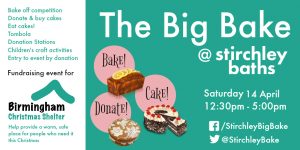 Thank you Danni for agreeing to talk to me about the forthcoming Stirchley Big Bake on Saturday 14 April. Can you tell us all again how much you raised for Christmas Shelter last year?

With what we took on the day and donations afterwards we raised around £1,300.00. The money was raised by peoples’ generosity. This event couldn’t work without the community involvement, everyone who attended on the day made the event what it was, and we’re so grateful for the support. Thank you!

That’s quite a lot! Well done! How did you raise so much?

Every penny raised was donated either on the door with the Pay As You Feel entry and with the PAYF tea, coffee and soft drinks. Bake sale cakes that had been donated by people to be cut up and sold in the bake sale, cakes entered into the Big Bake competition, the raffle and tombola. We had donations for raffle and tombola prizes from so many people it was fantastic. We also had donations given after the event by people who were unable to attend. Several people donated directly from their bank accounts to the charity.

What did that enable Birmingham Christmas Shelter to do for those affected by homelessness?

The money we raised at the Big Bake was enough to welcome 33/34 guests for 1 day / night at Birmingham Christmas Shelter. The Shelter is a local charity that has raised funds and recruited volunteers each year for over 44 years to provide local homeless and single lonely people with a free warm, safe place to eat, sleep and enjoy Christmas.

In 2017, they opened their doors at St George’s Community Hub, Great Hampton Row, Newtown, Birmingham, for the days and nights from 23rd December to 27th December. During this time they welcomed many regular guests and many new faces, serving three hot meals and over 300 sandwiches and snacks to an average of 122 people each day, peaking at Christmas Lunch with 150 meals served. The number sleeping over was slightly down on previous years at an average of 55 men and 5 women each night.

Apart from their amazing team of 250 trained volunteers, aged 17 to 93, several service providers such as hairdressers, dentists, counsellors, chefs, chiropodists, arts and crafts teachers, masseuses and entertainers come in and give their time and skills for free.

It sounds as though you already have a winning recipe for success, but can you tell us what is different about this year’s Big Bake?

This year’s Big Bake is slightly different to last year; to start with, it’s after Lent. Last year there were so many people who were unable to eat cake. We even had a couple of people walking around just savouring the smell of cake!!! So, in a bid to be a bit more inclusive, it’s after Easter this year.

We have eight categories of Bakes this year and they are open to all ages. Last year we found the children’s bakes were on a par to the adults.

We’ve included a technical bake this year too which is The Giant Jaffa challenge. We want a Jaffa cake which is at least 12″ in diameter! We’ve also included Free From Bakes category to be a bit more inclusive for people with restricted diets and also a First Time Bakers cake. This is for anyone who has yet to wield a whisk or break an egg. I’m asking people in this category to e-mail me at StirchleyBigBake@mail.com for the Victoria Sponge recipe which they can have a go at baking.

Another difference on last year is the decorated cakes will be available to be bid on. Last year people were asking if they could buy the whole cakes (minus the judges share), so this year there will be a volunteer on hand to give you an envelope to write your bid in and which decorated cake it is you’re bidding on. At the end of judging, any of the decorated cakes category which have bids will go to the highest bidder, they can then pay and take their cake away. But make sure to get your bid in before the judging starts, otherwise the cakes will be cut up and sold. All the other cakes in the Big Bake will be cut up and sold in the same way as last year.

Apart from the Children’s Bake, will there be any activities for the little ones?

Outside of the Big Bake, this year there will be children’s activities in the Cinema Room. There will be colouring in to do and there is a competition for the children too, with a “design us a cake and tell us your special recipe” They can come along and use on the of sheets provided to tell us their recipe for success and draw us their idea. They can be as creative as they like. A winner will be chosen and they will win a prize bag full of goodies.

I’ve read something about a giant cardboard cake that’s currently being built, what’s that for?

A 4ft 7″ cardboard cake…. six tiers starting with a top tier of 10″ working down to a bottom tier of 35″ diameter. This cake is part of an idea for community collaboration. We are asking anyone of any age to come along to the Cinema Room and have a go at folding an origami tulip or two or three. They can then be left in the basket which will be by the giant cake and once the event is over, I will glue them on to the cake. (It’s a hot glue gun and I don’t want anyone getting hurt on the day, so it is safest if this is done after the event).

The cake came about as I was talking to one of the members of Stirchley The Way Forward about their upcoming entry to the Stirchley In Bloom competition, after a very lengthy chat and ideas being spoken about we came up with the idea of the giant cake and it being decorated in paper flowers and how this could form part of the Baths display towards Stirchley In Bloom. Stirchley The Way Forward then kindly donated some money for origami supplies towards the cake, the Baths have generously donated supplies towards the cake and all the children’s activities too.

All of the cardboard was donated by J.F.A.Ball and Co. who are a Birmingham based company. And so then I set about making this cake with the help of my Mum, who I could not have done it without. 18 hours later – we have the cake!

What can we expect from the day? Will prizes be judged there and then?

On the day we are asking that all bakes being entered in to the Big Bake are at the Baths and registered no later than 2:00pm as judging commences at 2:15pm.

We are very lucky this year as Mrs Mills has agreed to come out of retirement for the day and be one of our guest judges again this year, along with Birgit from Change Kitchen who are also supplying the staff to serve everyone drinks on the day again this year. Then myself Danni Bee –  not many of you will know that I used to run a cake business called Bespoke Baking making one off cakes of all shapes and sizes. So, the 3 of us combined have a great range of experience to draw from with the judging, your bakes are in safe hands (and tummies) ;)

Once the judging has taken place, the scores will be added up and the winners will be announced. So if you’ve entered any bakes, please and try be at the Baths at around 4:00pm to hear if your name gets called out and collect your prize bag. There is a prize bag for the winner of each category again this year too.

If people don’t fancy channelling their inner Mary Berry or Paul Hollywood, what can they do to get involved?

If you want to get involved in any way, please do. You can bake a cake to donate to the bake sale, you can enter any of our Bake Off competitions, details of which can be found on any of our social media or our flyers or you can e-mail me as above and I will send you the details over. If you don’t want to Bake you can come along and eat cake and have a cup of tea, or you can play our raffle and tombola or you can fold origami flowers in the cinema room or bring your children along to have a go at the children’s competition and activities, or you can donate any of the items that the chosen charities need in the Deep End. There’s plenty of ways to get involved.

We are also having Donation Stations in the Deep End again this year for various charities including; The Homeless Period, The B30 Foodbank, SOVA and Gateway Family Services. details of all the supplies they need can be found on our Facebook page or @StirchleyBigBake on Twitter.

Any final advice for the novice baker?

The advice we would give to all bakers is you must bring a list of ingredients along with any of your bakes, competition entries and donations alike. Please remember your bakes are going to be sold to people so they need to know what is in the cake in case of any allergies etc. Always use fresh ingredients and make sure your bakes are baked through and safe to eat, no soggy bottoms or raw cakes when they shouldn’t be. If there are any ingredients which are temperature sensitive, please make sure they’ve been stored correctly etc. If you can follow general food hygiene practices, you’re on to a winner!  But most of all, have fun and we cant wait to see you there xx 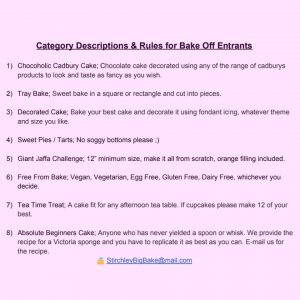