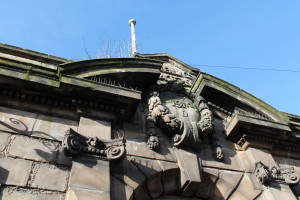 Paul Raymond Jones wrote a paper on the History of Bournville Lane Baths in 1981. This is a really useful snapshot of history taken from archival records. Can you tell us anything else that went on?

1903 Cadbury’s offered the Urban District Council a piece of land to build a ‘public swimming baths, slipper or spray baths and washhouse’.

1910 Stirchley Baths was opened. At this time Stirchley was a small village and many homes did not have a bathroom, but a tin bath in front of the fire. People would come straight from work to use the slipper baths and get clean before going home.

When the Baths were built there were laws which segregated swimmers and washhouse users by class and by gender. You were either considered to be First Class or Second Class (poorer, working class). Mixed bathing was not allowed until 1927, and then you had to enter and exit the pool by the male or female side.

1914-1918 The baths were kept open during the First World War, although with reduced opening hours. Soldiers and refugees could use the baths free of charge.

1922 The baths were closed for seven weeks due to a coal dispute which became a national crisis.

1927 Mixed bathing was introduced and bye laws were changed to ensure that proper bathing costumes of a thick material were worn (to prevent indecent exposure!)

1933 The Assembly Room at the baths was used as a rest room for the unemployed during the winter months.

1939-1940 The baths were closed for swimming during the first two years of World War II and used as a first aid post. They reopened in 1941. People rendered homeless by local bombings were allowed to use the baths free of charge.

Two hot showers were installed during this time due to the number of people during wartime using the baths.

In the 1940s, during the winter months the swimming pool was boarded over to create a dance floor. Bands used to play. 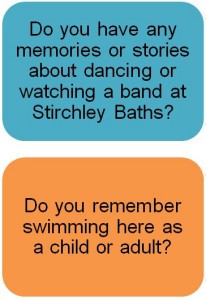 1964 The Finnish government presented Stirchley with a sauna suite to promote Finland.

1973 a privately-run Jewish Mikvah opened at Stirchley Baths. A Mikvah consists of a sunken bath which was filled with natural and heated water, in this case rainwater. It allowed for ritual immersion which is part of the Jewish religion.

1977 The washing baths were closed and the sauna suite was expanded to include 6 beds and a TV lounge!

1978 multi-gym was installed in place of the original Finnish sauna.

1988 Closure of baths due to lack of funds to repair the building at a cost of £1m. The ceiling in the ladies’ changing area collapsed.

1998 concerns over the deterioration of the building led to it being listed as Grade II by English Heritage.

2013 Where we are today – applying to the Heritage Lottery Fund for £1.3m to bring the building back into use, not as a baths, but as a fit-for-purpose community hub.