Stirchley is littered with old signs. Inspired by fellow heritage fan Tracey and her love for ghost signs, one afternoon I spent an hour searching for some along Pershore Road. If you’re familiar with the area you’ll have seen the many house and ‘villa’ names on properties. One such stone sign is an historic reminder of Stirchley’s community in times past.

The brickwork of 1399 Pershore Road (at the junction of Hunts Road) has a stone reading ‘The Central Bakery 1891’. In 1875, a group of locals formed the Ten Acres & Stirchley Street Co-operative Society (TASCOS). By 1914, the society had 12 branches and had spread as far as Bromsgrove. At its height it had over 50 branches, its own dairy, bakery, laundry, fishmongers and funeral home. It was an independent society, which in 1971, merged with the Birmingham Society. 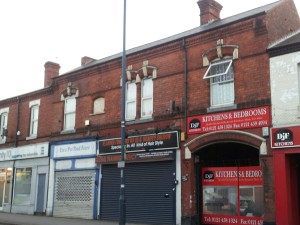 The Co-operative Group has its origins in Rochdale, Lancashire. Famously established in 1844 it was based upon the notion of ethical trading and belief that the profits of the business should be shared amongst members according to their purchases. By 1900 there were over 1,400 separate independent co-operative businesses in the UK, all members of a wider Co-operative Movement. During the 1900s, many of these independent societies began to merge.

At the TASCOS bakery, bread and cakes were baked on the premises and sold in the shop and distributed to shops throughout the area. The original bakery was only a stones throw away from the current Loaf and Stirchley Stores which is a co-operative run business.

Many of the Co-op’s great buildings are still standing, in one form or another. The fancy dress shop in Cotteridge (with the life-size cow outside) was a co-op shop and on Pershore Road stood a butchers with the slaughter house at the back. The Wolsey Sausage factory still operates at the rear on Charlotte Road.

The site where the Co-op supermarket now stands on the corner of Umberslade and Hazelwell was once a fantastically beautiful Edwardian department store. Originally built in 1915, it was known as TASCOS branch number one and housed many departments, such as ladies shoes.