Skip to content
Update of this months progress for the Community:

With the combination of an extremely wet October and the discovery of a few further structural set backs; October has been a challenging month for Balfour Beatty project team. However with the building now stripped back to its raw structure and a new programme been put in place; real progress is starting to be shown.

– All internal areas now propped ready for existing structural steels to be replaced with new.

– The Chimney has been completely re-pointed, had a brand new lightning protection system installed and is now awaiting a concrete cap. 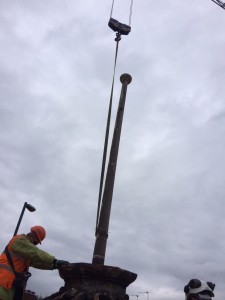 – The iconic Cupola and flag pole has now been dismantled, lifted off via the crane and taken away for refurbishment 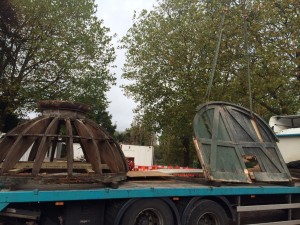 – The brickwork either side of the cupola has now had structural ties installed and been re-built back up to coping stone level.

– All timber roof purlins and rafters have now been replaced with new.

Here’s an update from Jack Carey; newly appointed co-site manager on the build:

“September has been a month of change on Balfour Beattys refurbishment of Stirchley Baths; after 47 years of service to the construction industry, Site Manager Steve Marsh finally has decided to step down and take his retirement. Steve set up and started this project back in February 2014 and has managed it up until now; I’d like to wish Steve all the best in his retirement and thank him for his efforts and invaluable service to our company. Moving forward I’d like to introduce you to our new site team; Site Manager Tony Fisher and myself, Site Manager Jack Carey. Having both come from Carpentry backgrounds we are both extremely excited to be working on a building with such heritage, character and will relish this opportunity. It is our goal to bring this building back to life and make it what it once was; the heart of the Stirchley community.”

Construction activities taking place this month has mainly been structural; due to the building being unused and un-maintained for so long water had penetrated in many places causing brickwork to move materials to decay. At present we are:

It is imperative that we get these structural works right to ensure that the building will last for future generations to enjoy.”

On Bournville Lane, opposite Lea House Road is a house that once held the shoe repair business of Harold Lea. Sadly this old shop sign has recently been sanded and painted over. From sharing this photograph on twitter I was able to learn from Mr. Lea’s grandaughter that he had two further shops. Another shoe repair business at 29 Maryvale Road and a drapers in the building that is now St Mary’s hospice shop on Raddlebarn Road.

His business was listed in the 1939 telephone directory. And he operated out of his premises on Maryvale Road between 1930 and 1971.

Do you remember Harold Lea’s shops? Do you have memories to share? 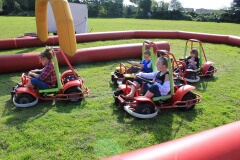 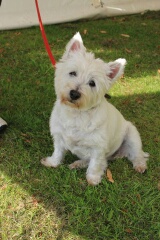 A message about the Stirchley Baths restoration from Senior Site Manager Steve Marsh:

‘There’s been lots happening since [the recent restoration tours]. The traffic management that is in place in Bourneville Lane & Hazelwell St is to allow us to put up hoardings and scaffold the building from the footpath for brick and stone repairs. The corner of the building next to the library is now down and the giant boiler removed, the other big blue tank that was on the ground floor is also gone along with all of the old balconies from around the pool. Just out of interest the blue tank was a filtration system for the pool water and contained 23 tons of sand and gravel. As everyone can see we have scaffold the chimney and will be starting the repair’s this week, so plenty going on.’

There will be more updates in the coming months and further restoration tours will take place in due time. Watch this space!