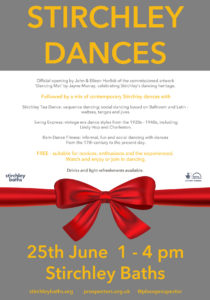 You Could Be Dancing!

The Dancing Mat, a commissioned artwork for the Stirchley Baths Heritage Programme, is nearing its launch with an event ‘Stirchley Dances’, on Saturday 25th June 1 – 4pm. This is a free event open to all, celebrating the heritage and current day dancing in Stirchley. John and Eileen Horlick from the Stirchley Tea Dance Group who worked with me to record steps from dances that would have been danced at Stirchley Baths in the 1940’s will officially open the dancing mat at 1pm in the foyer. After this there will be dancing in the main hall by the Tea Dance Group, Swing Express and Barn Dance Fitness, the latter two who hold weekly classes at Stirchley Baths. You can either come along and enjoy watching the dancing or join in. It doesn’t matter whether you are a complete novice, enthusiast or highly experienced – this is a celebration of all things in Stirchley. 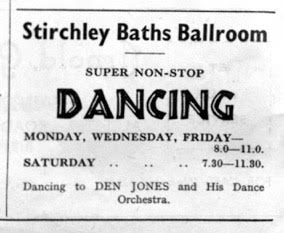