I volunteer for a Birmingham charity, who provide assistance for people returning home after a period in hospital. A couple of months ago, through my work with them I had the fortune to meet a a 91 year old man who for most of his life has lived in Stirchley. With the heritage interpretation aspect of Stirchley Baths in mind, I asked him if he would allow me to conduct an oral history interview. Although he wished to remain anonymous he kindly accepted.

He was born on Newlands Road in 1923 and grew up there with his parents and two older sisters. He remembers ‘You could look from my mother’s front room window, across the fields right up into Cartland Road. What came up was horse and cart mostly. Baker used to come up with horse and cart and err green grocer and coal man.’ 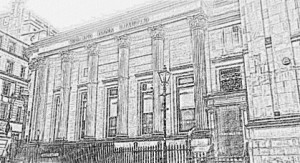 He went to school at Stirchley Elementary and remembers the boys school being on Pershore Road and the Girls at the back on Charlotte Road. He didn’t particularly enjoy school but even worse was to come with his first job at the age of fourteen. His mother saw an advertisement in a local Birmingham newspaper for a position in a insurance office, based at the Midland Bank on Bennett’s Hill:

‘I went for the interview, got the job. Ooh and I hated it to start with. It was like umm, like these plays like the old Scrooge in the ‘Christmas Carol’. It was an office with high stools and sloping desks and it was in semi-basement. So the level of the desk come with the level of the window sill, which was thick frosted glass because the bottom of that came out with the pavement and all you could see was like shadows going backwards and forwards past it. Err, I didn’t like that at all.’

Growing up when Stirchley was still a thriving village filled with independent shops and at the height of TASCOS he recalls:

‘Infact you didn’t need to go anywhere else. Even Christmas shopping we used to do all up there. We didn’t seem to go to town much.’

‘My mother used to love hats. She never went out without a hat on. Err there used to be a shop right at the beginning of Stirchley and the woman who owned it, who ran it, I remember her name was Dorothy Vincent. And whenever she was in the shop window or anything and me mother went passed she always used to knock the window and call her in and say “I’ve had some just what’d suit you” some hats.’

He fondly remembers local family businesses, such as Kealing’s Fruit store on the corner of Pershore Road and Hunts Road:

‘Mrs Kealing, ooh everso old. She used to stand with a hat on and a shawl and tie it like that! In all the bitter weather cos it was right on that corner and the shops open on two sides. It would be perishing cold and you’d see her standing there waiting for customers.’

At the age of nineteen in 1942 he went to France to fight in WWII. He remembers vividly the rough sea as he travelled by boat across the channel. Years later he returned to Britain, married and had two daughters. He remembers traveling to work from Stirchley to the city by tram at the age of twenty four:

“We used to go on the tram to start with cos I’d run many a times, left arm on the pole while tram’s been going. And the fare then used to be err what was it, tuppence halfpenny single or fourpence return ticket on the tram.’

Although growing up his family opted to use their tin bath each Friday evening, everyone taking their turn, he has memories of others using Stirchley Baths:

‘Used to be busier Friday night when you’d have people with the towels and their bags going there for their ordinary baths like you know. When you come past there the drains were always puffing out steam as the hot water was being run out and run in for the next person.’

When asked about Stirchley cinemas and the yearly carnival he paints a vivid picture of the excitement of pre-television life:

‘Eventually the Stirchley Pavilion was built and opened. ‘Course that was very plush compared with the other place.’ ‘Saturday night you’d be queueing outside, waiting for someone to come out so they could let you in.’ ‘Proper entertainment gettaway. Fantasy land.’

‘Once a year there was was big patch of wasteland at the bottom on Hunts Road comes down to where the River Rea is. And there used to be Pat Collins fair used to come on that with swings and roundabout. That used to be a highlight for us.’

‘They used to have err like these jazz bands. Think the one there they called the Blue Velvetiers. Used to be blue and that and girl at the front throwing baton up and catching it.’

I’ll leave you with a final childhood memory:

‘We used to come down Bournville Lane or go to Bournville Lane on a Friday night with a jug and there used to be like a little cooked meat shop a little way in and we used to buy faggots from there and gravy in the jug and then come down, lower down just this side of the Three Horse Shoes pub and there was people we knew there. Annie Ballad used to run a fish and chip shop. And we used to call in there and she would put a scoop of peas in and we’d go home and that was Friday night supper- faggots and peas.’

The interview recording will be given to the Heritage Officer once they are appointed, to be used as part of the interpretation for Stirchley Baths Community Hub. The recording equipment and guidance were provided by Birmingham Conservation Trust.

If you think you could spare some time to help people returning from hospital with a bit of shopping and company please contact Home From Hospital Care.