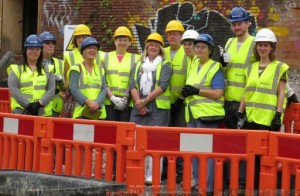 Yesterday Sirchley Neighbourhood Forum, Friends of Stirchley Park, Stirchley Happenings, Birmingham City Council and I were given a tour of Stirchley Baths.

Site manager Steve Marsh, explained how the large pool will be preserved but covered so it can be used as a main hall for sports or social events. This is similar to when boards were put down, to provide a temporary venue for dancing in the 1950s. The pool is 3ft at the shallow end and 6ft at the deep end and there will be a peephole so that the bottom of the pool is still visible. Although at present changing cubicles from this hall have been removed, some will be restored and returned.

The enormous boiler will be chopped into pieces to make it possible to remove it from site. The basement is filled with Roman-like channels, for water from the baths and rain water to circulate. I eventually got my bearings when I could hear the clunk of the drain cover motorists drive over outside the co-op on Hazelwell Street.

Thank you to Karen Cheney for arranging the tour. There will be more opportunities for residents to take a look at the work in progress at the baths in upcoming months.