Hello, my name is Soho Bear. With everyone so busy getting ready for Christmas I’m helping out by doing a guest blog. Recently I’ve been on a bit of a heritage tour of the great attractions in Birmingham so it was only natural that I pay a visit to Stirchley Baths. 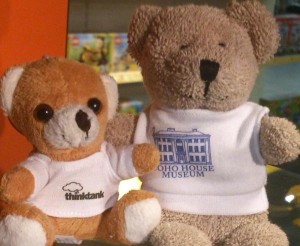 I’m originally from Handsworth and live at Soho House, which was home to industrialist Matthew Boulton. Today the house is a museum that hosts a lot of community events. Because of this I couldn’t wait to see Stirchley Baths and get excited about all that the Heritage Lottery Funding will make possible!

Last week, I and people from Stirchley community enjoyed a floodlit tour hosted by the site team for Belfour Beatty. We all put on our hard hats, high visibility jackets, gloves and goggles. During the introduction (where I made a new friend) it was explained to us that although the wet and windy weather has been a challenge, the building is now structurally more stable, with most steels in place, which means dozens of workers can now be on site.

The tour started in the main pool room and it is looking great! The balconies have been removed (although part of it is undergoing conservation and will be returned once building work is near completion). The roof of this room, which will be transformed into a fantastic sports hall, has now been insulated, felt and battened. The beautiful Welsh and Yorkshire slates are now being set out on the ground ready for fixing. The timber frame to the pool roof lantern is now complete and work on the glazing has begun.

The enormous boiler has now been removed from site and the boiler house entrance wall is now being re-built. The room that will house a cinema screen has been opened out. The lovely original bath tiles will make these areas unique.

The most exciting part of the tour was a trip to the roof! With a little help I ascended the ladder! The flat roof has now been stripped and swept of existing perished asphalt, ready for new insulation. The huge chimney that used to puff out smoke from the coal that heated the water has had a lot of structural work. The brickwork has been re-pointed and washed down and the chimney top has been covered with a concrete cap. The chimney scaffold was due to be dropped but unfortunately due to theft of the new lightning protection system, this has been delayed.

The Cupola, which you may all be missing, has been removed to Ironbridge for conservation repair. Brickwork to the base of the main cupola has been taken down and completely re-built. The environmental clean and scaffold to the missing Cupola no.2 base has now been completed with a structural inspection taking place soon.

Our tour finished with a hot cup of tea and a mince pie (mini sized for me, obviously). All that is left is for me to wish you all a Merry Christmas and maybe you’ll see me in another exciting Birmingham attraction in the new year!