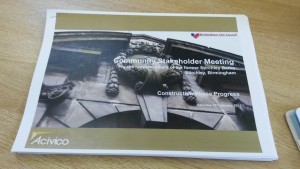 On Saturday a group met at Selly Oak District Office to discuss the future running of Stirchley Baths Community Centre. Amongst the group were specialists in Community Asset Transfers and prospective trustees.

Four residents were unable to attend and sent their apologies.

The purpose of the meeting was to make the role of the future trustees clear and explain how the Community Asset Transfer would work. The community centre is due to finish in August and Open to coincide with Stirchley Late Summer Bash in September 2015. £3,000,000 from Tesco has been provided from the sale of the old community centre and £1,500,000 from Heritage Lottery Fund, on the condition there will be a Heritage Officer appointed for 3 years to provide interpretation and community activities.

Mark, the project architect talked about how the restoration is progressing. For the benefit of some attendees who haven’t visited the building he provided photographs showing progress.

We discussed the layout and the updated plan for improved access to the carpark. The carpark will back onto Stirchley Park and approximately £40k from the demolition of the bowling green is being used for improvement work on the park. Once the community centre opens it will share a special relationship with the park as they will naturally work together. Further talks about the layout of the community centre explained there’ll be a kitchen area, cafe, main hall (where the pool will be covered), a cinema room and several multi-use rooms. These have been designed for hire with 15-20 people being able to use a medium sized room. These will provide revenue for the community centre, making it more sustainable.  Disabled access will be through the rear entrance, near the green area and will lead straight into the cafe.

Mark said the iconic cupola is due to be reinstated soon. It had gone to Ironbridge for restoration work. The original plans of the building showed that there was once a second cupola and clock. Both of these will be added to the building. There will be a meeting with the clock manufacturer in a few weeks regarding the style of the clock. Although the building was in quite a poor state at the start of restoration, some beams, such as the one in the room that used to house slipper baths has been repaired off-site and will be reinstated. Half of the roof has been salvaged and matching welsh slates have completed this area now. The glass lantern, which will provide much needed light to a building with few windows has been finished and painting has begun.

Karen explained that the community centre will be like a mini MAC for the area and it will have a similar feel to St Nicholas Place in Kings Norton. Stirchley as an area has a lot of ‘social capital’ because there are lots of creative groups, such as Stirchley Happenings and S.U.R.N who network to improve the area. The Community Asset Transfer means that Birmingham City Council will set up the operational aspects of the building and run it from September 2015 to March 2016. It will be at that point that the trustees who have been appointed take over. To enable this, people such as Alison and Jane will work with the group to write a business plan. The lease will be 25 years and to be successful the group will need to be interviewed to ensure they are capable of the role. The group will be advised to register themselves as a charity as this cuts rates by 80%. Although the independent advice they receive will require payment, the district have funds available from ‘community scaffolding’ and fundraising will take place. The centre is not intended as a sports location but groups such as badminton, yoga, karate and fencing will be welcome. It is also hoped that a significant number of groups who used the old community centre will use the new one.

The main question is whether this group want to run the building. Although there are other community stakeholders, such as the Neighbourhood Forum and Friends of Stirchley Park that want to support future trustees and the project, the group must be certain that they are happy to proceed.

Birgit Kehrer who runs Change Kitchen provided us with a yummy lunch while Nick Booth from Podnosh introduced the group to Stirchley Baths blog. He talked about how it was set up to demonstrate community support for the Heritage Lottery Fund bid. I explained how I started contributing to the blog a year ago after attending a social media surgery hosted at Loaf. The blog (and Facebook and Twitter accounts) are intended to keep people interested in the project while the restoration is taking place. Anything Stirchley related can be blogged about. I talked about how I want more people to contribute blogs, to share more Stirchley stories. If you have anything you’d like to write about, be it Stirchley’s past or things happening today it’d be great to share them on the blog. Nick will be hosting another social media surgery in March to help anyone that would like to learn how to blog and use Facebook and Twitter. If you have any old photos of Stirchley- a funday, street party, opening of a shop- anything at all that you’d be happy for me to share on the blog please get in touch.

It was agreed that the group will meet in the next few days independently to discuss whether they want to be trustees. A decision will be needed in the next four weeks.